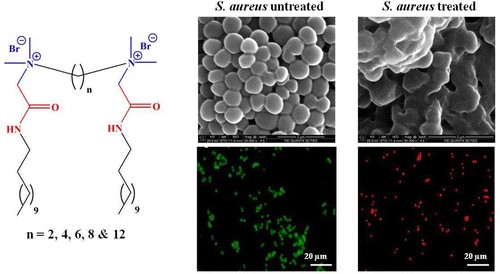 The development of novel antimicrobial agents having high selectivity toward bacterial cells over mammalian cells is urgently required to curb the widespread emergence of infectious diseases caused by pathogenic bacteria. Toward this end, we have developed a set of cationic dimeric amphiphiles (bearing cleavable amide linkages between the headgroup and the hydrocarbon tail with different methylene spacers) that showed high antibacterial activity against human pathogenic bacteria (Escherichia coli and Staphylococcus aureus) and low cytotoxicity. The Minimum Inhibitory Concentrations (MIC) were found to be very low for the dimeric amphiphiles and were lower or comparable to the monomeric counterpart. In the case of dimeric amphiphiles, MIC was found to decrease with the increase in the spacer chain length (n = 2 to 6) and again to increase at higher spacer length (n > 6). It was found that the compound with six methylene spacers was the most active among all of the amphiphiles (MICs = 10–13 μM). By fluorescence spectroscopy, fluorescence microscopy, and field-emission scanning electron microscopy (FESEM), it was revealed that these cationic amphiphiles interact with the negatively charged bacterial cell membrane and disrupt the membrane integrity, thus killing the bacteria. All of the cationic amphiphiles showed low hemolytic activity (HC50) and high selectivity against both gram-positive and gram-negative bacteria. The most active amphiphile (n = 6) had a 10–13-fold higher HC50 than did the MIC. Also, this amphiphile did not show any cytotoxicity against mammalian cells (HeLa cells) even at a concentration above the MIC (20 μM). The critical micellar concentration (CMC) values of gemini surfactants were found to be very low (CMC = 0.30–0.11 mM) and were 10–27 times smaller than the corresponding monomeric analogue (CMC = 2.9 mM). Chemical hydrolysis and thermogravimetric analysis (TGA) proved that these amphiphiles are quite stable under both acidic and thermal conditions. Collectively, these properties make the newly synthesized amphiphiles potentially superior disinfectants and antiseptics for various biomedical and biotechnological applications.